I’ve been bringing you the story of Deanna Williams, a single mother and grandmother who is currently pregnant and suffering from multiple sclerosis.  She is also the victim of rape.  Not nearly a day goes by now that I don’t learn something new in the case where attorneys are going after her for profit without any justification for doing so and seeking to use the court as a weapon against this defenseless woman.  In looking at the public record of documents near the end of 2017, it becomes clear that not only did the court render a final judgment against Ms. Williams to the tune of over $1 million, most of which was awarded to an attorney who had performed no legal services for Ms. Williams during her rape case nor was his firm a part of offering anything in that case, but it also deprived Ms. Williams right to defend herself and argue against a court order that came two full days after the final judgment.

To catch up on this case, please view the following previous articles:

According to attorney Nicole Spence of Affordable Law, who filed a motion to vacate on behalf of Ms. Williams, the order is to come before a final judgment.  Once the final judgment is issued, that is basically the end of the case.  However, as you will see, that did not happen, and I will let the reader and the Florida Bar, as well as Governor DeSantis and Attorney General Ashley Moody determine just how much corruption, negligence, conspiracy, malpractice, ethics violations and downright criminality has been engaged in by the court, Ms. Williams’ attorneys and the plaintiff in the case by the actual records of the court.

All of the documents below can be easily obtained from the public record at LeeClerk.org under case 13-CA-003181.

First, understand that three final judgments were entered into the record, along with the report and recommendation of the general magistrate on the same day, 11-27-2017.

All three final judgments were signed on November 20, 2017, by Judge Jay B. Rosman, who would be busted in a prostitution ring sting only a few weeks later.  Keep that in mind.

Here are those documents. 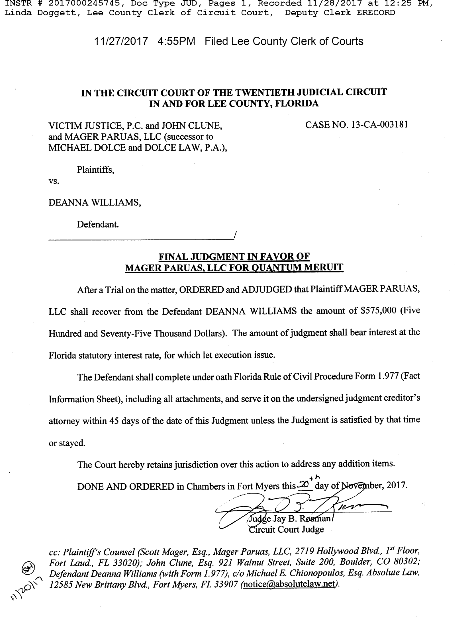 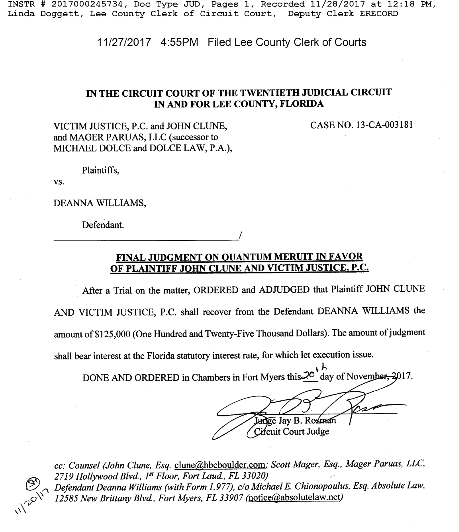 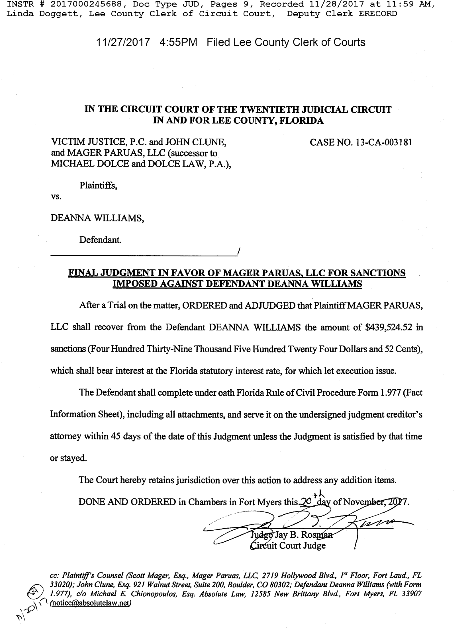 Notice that Scott Mager and Mager Paruas, an attorney and firm that never offered nor were part of the original civil rape case of Ms. Williams were ever involved nor render any services, even though, according to court records, Scott Mager of Mager Paruas LLC claimed that it was “the law firm that handled the litigation for which Judge Rosman awarded entitlement to all reasonable fees and costs.”  Ms. Williams alleges that Mager purchased the rights to sue her from attorney Michael Dolce, and Mr. Dolce claims that is untrue.  Yet, Mager and Mager Paruas are attempting to collect more than $1 million from Ms. Williams when they provided absolutely no litigation services to Ms. Williams.

Now, take a look at the date on the report and recommendation of the general magistrate, November 22, 2017, a full two days after the final judgment.

Where I come from, we say “something is more crooked than a dog’s hind leg here.”   I’m not the only one that thinks so either.  Attorney Nicole Spence also believes something is out of order here because the Magistrate is not a judge, and a recommendation must come before a final judgment as to give the defense a time to argue against it.  That never happened.

There seems to be a serious violation of the rights of Ms. Williams here.

Additionally, Mager also received another $200,000 of Ms. Williams money due to what Ms. Williams previous attorney, Mike Chianopolis, called an error and which Ms. Williams claims was a fraud upon the court.  Mr. Mager sought to receive all of the remaining settlement payments promised to Ms. Williams, even though that was not the agreement reached by her and her counsel, Mr. Chianopolis, and he even filed a motion and affidavit to the effect that what was entered into court records was not what was agreed upon on June 1, 2018.  Yet, the money continued to go to Mager, money that she desperately needs now for medical care due to a high-risk pregnancy and to retain an attorney to represent her.

This woman’s life has been destroyed.  First, via a rape.  Second, attorneys who were supposed to represent her and look after her interests have time and again been negligent, engaged in malpractice, theft, and incompetence… or they have conspired to rob Ms. Williams and use her in a bigger plan to force Ms. Williams to sue Gloria Allred for an even bigger payout.  I don’t know which it is, but there is definitely enough for the governor, the attorney general, the Florida Bar and the governing body that deals with judges in the state to get involved and get involved quickly.

Ms. Williams has lost her home.  She is about to lose her car.  She is also about to lose the apartment she is living in, and all that can be done in this matter is that an attorney, Scott Mager, who provided no litigation services whatsoever to Ms. Williams, can do is push for a contempt of court enforcement against her that will seek to arrest her.

It should be noted that Mr. Mager wanted to depose Ms. Williams and was to do so by March 27, 2019.  Here is the record of attempts Ms. Williams made to set up deposition with Mr. Mager after her last attorney Daniel J. Endrizal, III withdrew from the case on March 19, 2019.

3/27/2019 was the final day to be deposed as determined by the court order, and Scott Mager never returned her calls nor her emails to establish a time for deposition to meet the date of 3/27/2019.

Instead, Scott Mager’s assistant said that he would be available for deposition on April 17, 2019, nearly three weeks after he knew the court had set a date on, and Mr. Mager has been the one pressing the court to go after Ms. Williams.  All the final public records show this at LeeClerk.org.

Still, Ms. Williams made two final attempts as late as 3/29/2019 by phone to try and set up a deposition.

According to Ms. Williams, she spoke to an attorney about the April 17, 2019 date for deposition and was told that it was a trap set for her and that she should respond to the assistant by requesting deposition within the time frame allotted by the court or asking that they set aside the contempt order and writ of bodily attachment before agreeing to a deposition date outside of the court’s parameters.

Attorney Scott Mager never responded, but he did appeal to the court to enforce the contempt charges and have Ms. Williams arrested.

Williams is alone, with child and threatened by a court that has not rendered justice to her, poor due to theft from her own attorney and alleged fraud upon the court by the attorney pursuing her, according to her previous attorney.

I ask you, can you not help this woman?  I ask putting my money where my mouth is.  I have helped and I’m asking you to do the same.  Additionally, if you are an attorney or know of an attorney who might take this case on contingency, please, click Contact at the top of the page and provide me a number to get in touch with you and I will have Ms. Williams contact you.  She is in desperate need of your help.

Finally, there is already a Bar investigator that has been assigned to Ms. Williams concerning the attorneys involved in this case for which she is filing a complaint.  I ask, where is Governor DeSantis?  Where is Attorney General Ashley Moody?  Ms. Williams has even been in touch with members of the Trump administration with a response.  America, you say you want to make America great again.  Well, you can’t make it great if you don’t stand up for the weak against injustice.  Who knows when you will need someone to stand up for you!

You can contact Governor DeSantis on behalf of Ms. Williams below:

Additionally, you can contact Attorney General Ashley Moody on behalf of Ms. Williams below:

Finally, it may even help to contact the Florida Bar on Ms. Williams’ behalf to see if they will begin to investigate ethics violations, negligence and corruption that appears to have taken place with regards to Ms. Williams’ representation, legal agreements and rulings by judges in the cases.