You’d think with all of the serious stuff that’s actually going on in society today and across the world, the White House would have its hands too full to deal with something like, say, toys that perpetuate gender stereotypes.

Social engineering and the politically correct agenda are at the top of Obama’s list. 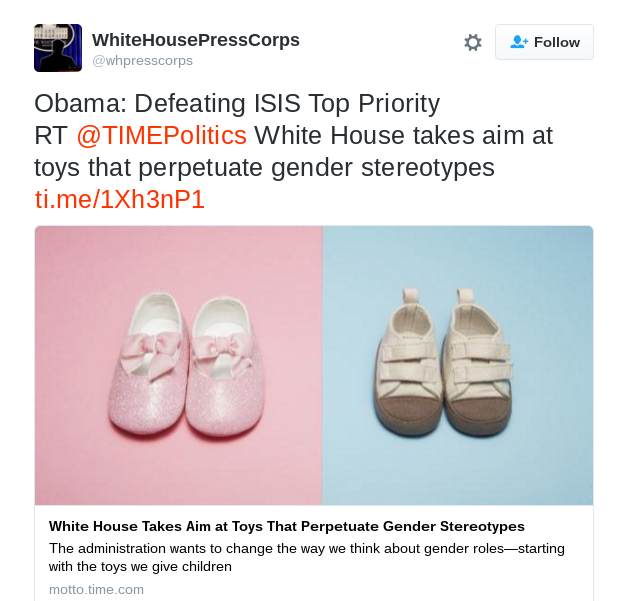 The White House Council on Women and Girls is hosting a conference as “the administration wants to change the way we think about gender roles—starting with the toys we give children.”

According to TIME Magazine, also part of the initiative along with Netflix, the Girl Scouts, and Discovery Communications, this is about our children’s future in the workforce:

“Research shows that the toys kids play with and the media they consume has a real impact on the skills and interests they develop over their lifetimes,” Tina Tchen, the executive director of the White House Council of Women and Girls, said on a conference call. “We think it’s important for children’s media and toys to expose kids to diverse role models and teach them a variety of skills.”

Tell that to call the “skill-less” former tomboys walking around who climbed trees and played with “boy toys” as children.

Of all the things that the White House could at least pretend to deal with in this country: the recession that never really ended, the slowly imploding economy, unemployment taking the nation back to third world status, unconstitutional undeclared wars, the crumbling infrastructure to include the poisonous water… a list that goes on and on and on… and the Obama Administration is “going after” some kid’s Easy-Bake Oven because it isn’t inclusive enough?

Really? Is toy stereotyping the most detrimental event facing our children’s economic future in modern America? That’s what is hampering their ability to become gainfully employed adults in this country when they grow up?

Not the fact that college degrees are a dime a dozen in a nation where the jobs that haven’t been shipped overseas are being replaced by robots while the puppet in chief continues to sell us out with international trade agreements like the TPP?

Then again, the Obama White House is currently racing to that $20 trillion national debt finish line with brilliant, pressing scientific research like this three-year, $548,459 study on male engineering student “microaggressions” toward women colleagues.

How much more politically ridiculous can things get? It’s starting to stink and burn like the hot dumpster fire it is.

Next “KKK Member With Whip” Panics College Over Race… Oh, Wait. It’s a Priest With Beads