[The following was written by Jeff Dunetz and originally appeared at lidblog.com.  It has been reprinted with permission.]

Today, President Trump became the first sitting American President to “visit” North Korea.  He met North Korean leader Kim Jong Un at the demilitarized zone (DMZ), stepped across the dividing curb, the two leaders had an hour-long meeting which resulted in a restart of the negotiations between the two countries and the liberals going nuts.

Right now @MSNBC live NBC Korea expert Victor Cha says meeting Kim at DMZ is like having the Super Bowl when you haven’t played a single game. This meeting should be at the end of successful talks not when there’s been no progress

Trump is lying. I was there for all 8 years. Obama never sought a meeting with Kim Jong Un. Foreign policy isn’t reality television it’s reality.

Photo ops don’t get rid of nuclear weapons, carefully negotiated agreements do. Trump’s foreign policy is a failure – from NK to Iran to Venezuela. https://t.co/cpBiWPb1N0

I guess Rhodes wants conflict with N. Korea, but he likes our appeasement of Iran.

Trump’s administration has made every effort to manufacture a crisis with Iran: https://t.co/y7g3ATGS1X

Another meaningless photo op that will help Kim run out the clock and produce more nuclear weapons. Great. https://t.co/mtSCR2hvrF

But only eleven days ago he retweeted this Bernie Sanders warning. In other words no to Iran war, yes to North Korea war. 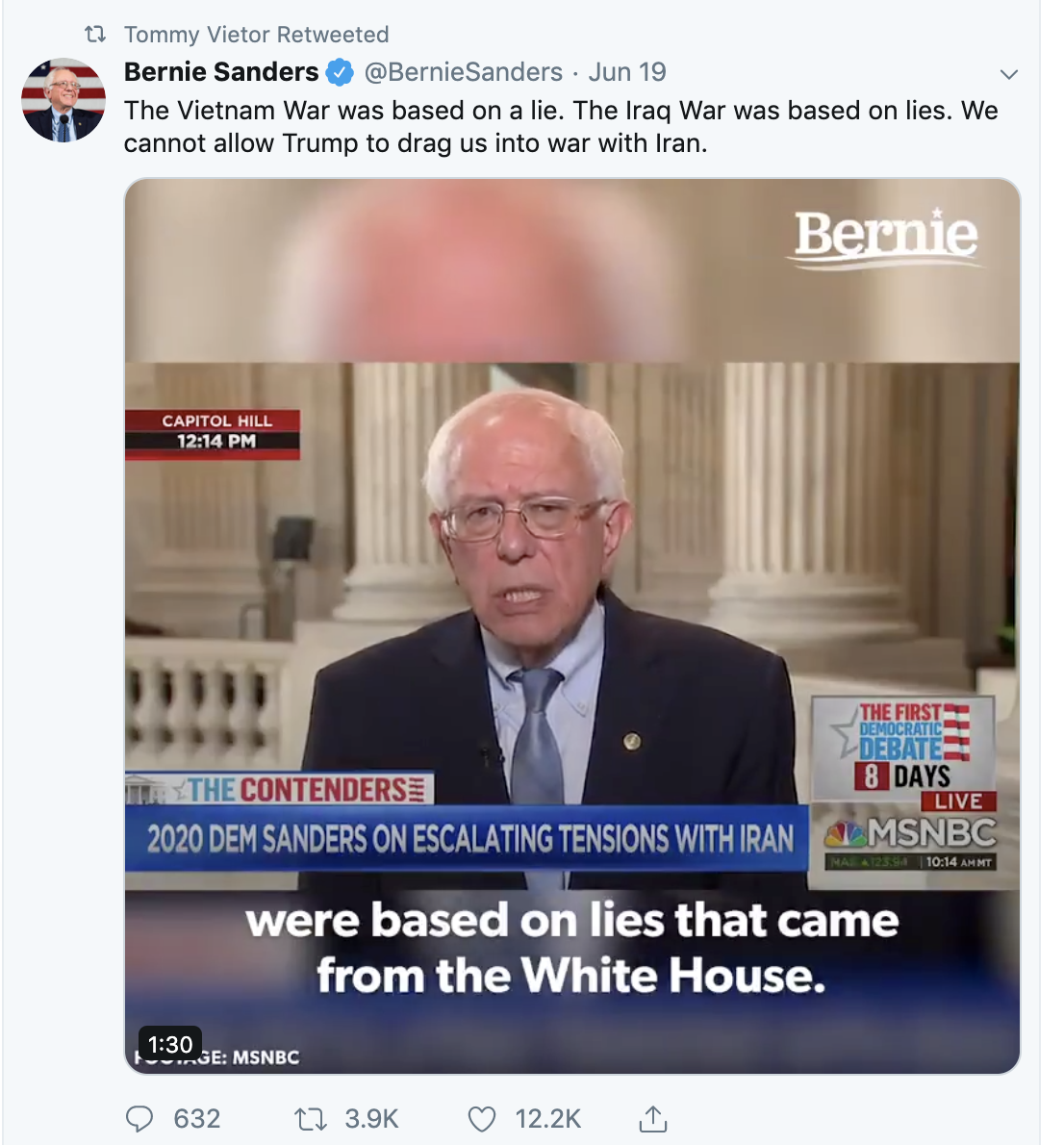 Imagine if Obama had jumped through this many hoops just to shake Kim Jong Un's hand for a photo op at the DMZ.

The reaction from Republicans would've been off the charts.

I'm sure they'll sound the alarms on Trump doing it though. 😂 https://t.co/YLoYZwnNK1

Ellen seems so nice on her program, but her producer Andy Lassner…maybe not so much:

Politico said it was all about the 2020 election

The historic event — well-promoted and dramatically staged for the television-conscious president — comes just as Trump launches his reelection bidhttps://t.co/Ukp3d4A92J

And they are correct, if we get into a nuclear war with North Korea millions will die, many of them will be voters possibly hurting his re-election.

Joe, he has conceded as much the U.S. has conceded on sanctions. Sorry, Joe, you are thinking about Obama, he spent his time conceding to Iran.

Two weeks ago, Chuck Schumer said he worried that the Trump administration may “bumble into a war” with Iran. Now worries that Trump may bumble into peace?

If the renewed talks lead to an agreement, Schumer will probably criticize Trump for hurting sales at military-related manufacturers, he doesn’t care about America, only politics

Liz Warren thought the meeting was a bad idea:

Our President shouldn’t be squandering American influence on photo ops and exchanging love letters with a ruthless dictator. Instead, we should be dealing with North Korea through principled diplomacy that promotes US security, defends our allies, and upholds human rights. https://t.co/9ROpNfjYbY

As did the Senator from Planned Parenthood:

This President should take the North Korean nuclear threat and its crimes against humanity seriously. This is not a photo-op. Our security and our values are at stake.

President Trump is hell-bent on starting a war with Iran. My first act will be to engage Iran to stabilize the Middle East and make sure we do not start an unwanted never-ending war.

But today she didn’t like that the Trump/Kim meeting led an agreement to restart talks:

"It's not as easy as just going, and… bringing a hot dish over the fence to the dictator next door. This is a ruthless dictator."
Presidential candidate @amyklobuchar, on President Trump crossing into North Korea to negotiate with Kim Jong Un. #CNNSOTUhttps://t.co/q7wDeU4pPj pic.twitter.com/1wj8dmMBBN

In this bloated unreality show, the President has given the greatest democracy’s gold seal of approval to a murderous dictator. Trump has dramatically elevated Kim without any signs of a strategy to reach an enforceable nuclear deal. https://t.co/8v6RlnGMPN

MSNBC’s in-house bigot, Joy Reid believes a war with N. Korea is good, but a war with Iran is wrong.

.@MalcolmNance: This is an absolute total abject disgrace… #Trump goes to the DMZ where in that immediate area a U.S. officer was hacked to death with axes by [soldiers of Kim Jong-un's father]… To say that he's listening & admiring his voice? That is the voice of evil #AMJoy pic.twitter.com/bTtfFlR2bE

#ICYMI–@mehdirhasan: A war in #Iran would make a war in #Iraq look like a walk in the park. https://t.co/mm0MxWcZKA via @amjoyshow

Joy not that you care about the truth, but the president has said he doesn’t want a war with either country.

S.E. Cup who made it “big” because she was a conservative commentator who liked to show her legs on RedEye:

Now on CNN, she doesn’t try to debase fellow female commentators by being a pundit-sex object, and today she debased the Trump meeting.

“The question is why does Trump really want to shake hands with Kim Jong Un? The only explanation is that he’s desperate.” Watch @sam_vinograd & @secupp discuss Trump’s potential DMZ meeting. pic.twitter.com/2uzcLqT2Hn

One of the reasons Donald Trump was elected president was his business experience. Part of that experience was being a premier salesman. His establishment of personal connections with people like Kim Jung Un, China’s Xi Jinping, and others, is all about sales. Trump is trying to sell Kim on giving up his nukes and President Xi ending China’s anti-free trade practices—but it is all about his salesmanship.

While liberals and other Trump-haters pontificate negativity about today’s Trump/Kim meeting and especially his few steps into North Korean territory, as someone who spent much of his career in sales, I can endorse today’s short session.  Closing a deal, in this case trying to get Kim Jung Un to give up his nukes, requires a personal relationship and face to face meetings. Some have complained that Kim hasn’t made any concessions yet (except for stopping nuclear tests), the United States hasn’t made any concessions either, and Trump will not withdraw the sanctions until Kim Jung Un makes serious atomic concessions. That is the art of the deal!