The creeping crud that is Liberalism, the modern day hydra head of Relativism as espoused by Protagoras, has so permeated our society to the point that we are desensitized to much of the decay. The scourge of libertine perversion has myriad heads – like the Hydra of ancient Greek mythology, which lived in the swamps near to the ancient city of Lerna in Argolis. And like the Hydra, it seems that when you cut off one head of liberalism, two grow in its place. Liberalism is a monstrosity that consumes and devours people and entire civilizations. Many of these heads are now commonplace in our society—democrats, homo-perverts, and feminists, to name but a few.

But what I am about to show you is beyond the bounds of civilized humanity, and is pure evil and filth—the very product of the liberal mindset, the evil spawn of Godless human beings, and outside all boundaries of decent folk.

Earlier last week, I came across several articles of a liberal’s concept of art: disgusting mockery of the word. The first was Vaginal Knitting; yes, you read correctly reader: Vaginal Knitting. This twisted form of “performance art” comes to us courtesy of the filthy feminist “artist” Casey Jenkins, a self-professed “craftivist” who is knitting using wool placed — you guessed it — inside her vagina. She does this live, in an “art gallery” in Darwin, Australia. For 28 days str8, she knits from a skein of wool placed inside her vagina, pulling it out to knit God knows what. She also, in the quest to maintain the “integrity” of the performance process, does this even while menstruating, as, according to her, “The performance wouldn’t be a performance if I were going to cut out my menstrual cycle from it,” she opines. Such is the cognitive processes of liberals.”

Why is she doing this, you ask? Well, why does any feminist do anything? To be disgusting and shock people. Yet, her reasoning is that she is combating misogyny. Of course, no one with their intellectual faculties in working order would believe that such perversion would in any way have a diminutive effect on misogyny. Yet, this is the excuse that she uses. This is yet another example of why liberals should not be allowed to breed, be afforded any public venue or media coverage, or be allowed to vote without a thorough psychological examination by a conservative professional. Readers, you can Google till you’re dying of old age and you will never find a Conservative doing this abominable, if not mentally deranged, crap. It figures the Pervington Post would run this tripe – twice.

I guess we can all be glad she hasn’t taken up baking.

Read more about it here.

Then I came across another lovely example of the liberal perversion of “art” – Vomit Art. Yep, you read right again: Vomit Art. It seems that another nutball “Performance artist,” Millie Brown, had her neurons misfire one day and the result was her mastering the art of regurgitation. Brown’s mental brain fart is called “Nexus Vomitus,” which comprises Brown drinking colored milk and then spewing it back out onto white screens or canvas to an musical accompaniment of opera singers Patricia Hammond and Zita Syme. You can read all about it here, yes, with all the attendant pictures:

Next, we are on to baking and the continued fascination of feminists (and perverts in general) with female genitalia. With the advent of technology, decorating cakes has reached a new height. But not content with lifelike culinary creations of animals, people, the Star Wars Death Star, football fields, Mickey Mouse, and other plebian creations, feminists have again perverted a new form of artistic expression into a sounding board for their disgusting emotional issues – Vaginal Cakes. Yes again, you read correctly: Vaginal Cakes–or more precisely, Baby Shower Cakes. Cloaked in a poor attempt to disguise this filth as a celebration of childbirth, those with extreme mental deficiencies have found a new outlet for their sickness – lifelike depictions of childbirth in the form of a cake – which, presumably, your guests are supposed to eat, assuming they don’t vomit on your carpet and create some art first.

This picture is representative of such creations; it’s like childbirth meets the Exorcist. The only real purpose behind such a cake is to ensure that you will never have guests at a baby shower ever again. This is another product of the liberal mindset, but it is not the last.

Read more about it here.

Finally, we get to one of the most gruesome baby-shower cakes around – one that looks like a newborn, cut up and ready for your hungry guests to gorge themselves on.

It’s more appropriate for a Nephilim giants and demons get-together—Nephilim giants ate humans babies right out of a pregnant woman’s womb! For the uninformed. Nephilim were alleged to be human-Angelic hybirds, 10 feet tall resulting from the angels mating with human women. As my friend Johnie Pullum observed,

“This shows just how evil abortion advocates and the politicians that support them are. They are nothing less than blood-thirsty, evil demons! Who the **** in their right mind would make and bake a cake in the form of a baby and proceed to eat it at a party! This is the can of worms that the democrats/ liberals opened with “Roe-V- Wade” in 1973….What kind of human being would get delight out of participating in something as obscene and inhuman as this? Nothing human as we know it… The chef who made this cake needs to be taken out and nailed to an up-side-down, satanic cross!” – Johnie Pullum

Had enough of the Left and their demon spawn ways yet, people? This is what happens when you allow people to “do whatever they want” in the name of Freedom of Expression. This is the direct result of God being removed from our schools, our government, the failure of the pulpit to enforce a Scriptural discipline, the removal of damnation and eternal punishment from sermons, and the tolerance of Sin and Evil.

This is pure Evil straight from the bowels of Hell. Demons most certainly live among us, possessing the bodies and souls of those who would do such things. We allow this horror to exist in our country and then have the temerity to ask God for His deliverance? We wouldn’t need His deliverance had we not turned our face from Him.

With every passing day, our Nation sinks further into the depths of depravity, the gulf between us and God widening every day as we slip slowly beneath the dark waters of an evil sea. The flame of the glory of old that once burned in our Nation is being slowly extinguished.

God has withdrawn His favor from this nation. His hand is now against us, and like unto days of old, He has given us over to the reprobate, the ungodly, to Evil. And you know what, folks? We deserve it.

Wherefore then should we expect God to deliver us, that He should intercede on our behalf, land of baby-killers, idolaters, and perversions unbounded. Our voices reach Him not – He has abandoned us, as we have abandoned Him. Look not to God for deliverance, until we have repented of our actions; and repentance of words without action is no repentance at all.

It is time for Civil War and ridding our country of the Evil that has consumed it.

And that’s just the way it is, people.

Next Christian Refuses to Provide Flowers for Sodomite Union, May Lose Everything - But She's Fighting 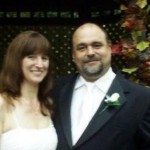