This is one of the most important articles that I have written in a long time.  The strange events of the past year and a half have befuddled and mystified many, and in this article I am going to explain why America has been given a temporary reprieve.  If you go back to June 2015, I warned my readers that major financial problems were imminent, and sure enough in August 2015 we witnessed the greatest financial shaking that we had seen in seven years.  I remember getting emails from my readers applauding me for absolutely nailing that prediction, but we were all concerned about what was coming next in September.  If you will recall, there was more buzz about September 2015 than any other month that I can ever recall.  That was the month of the last blood moon, the end of the Shemitah year and the Pope’s visit to the United States among other things.  There was a tremendous amount of anticipation that the crisis that had begun in August 2015 would greatly accelerate in September and lead us into a period of cataclysmic global chaos.  But that did not happen.  Instead, U.S. financial markets calmed down and eventually recovered.  There was a shift in the political realm as well, as the second half of 2015 marked the rise of Donald Trump.  During those key months, Trump miraculously built a commanding lead in the race for the Republican nomination that none of his opponents were ever able to overcome.  And now that Trump has won the election, an economic surge appears to be happening that is unlike anything that we have witnessed in many years.

Compared to much of the rest of the world, America appears to have been blessed over the past year and a half.  Our financial markets have performed extremely well, the U.S. dollar is the strongest that is has been in over a decade, and jobs are coming back to the United States.

None of this was supposed to happen.  In fact, our financial system was in such bad shape a year and a half ago that it was being projected that the U.S. would be on the bleeding edge of the next crisis.  But instead here we stand safe, prosperous and seemingly secure.

How in the would can we explain this?

What I am about to share with you I have previously shared on national television down at Morningside, but it has been brought to my attention that I have never shared this with my readers on The Economic Collapse Blog.  I apologize for this, because the past year and a half doesn’t make any sense until you understand these things.

The rest of the UN Security Council was ready to go along with the French resolution, but there was just one country standing in the way.

Just about everything else that Barack Obama did throughout his entire presidency was bad, but in this instance he got something completely right.  The decision whether or not to divide the land of Israel was in his hands, and he made the right call.

Once this decision was made, it was almost as if someone hit a “pause button”.  None of the bad things that people were forecasting ending up happening, and since that decision America has been blessed compared to the rest of the world.

And this is perfectly consistent with what God said that He would do.  Starting in Genesis 12 and continuing all throughout the Scriptures, God promises to bless those that bless Israel and to curse those that curse Israel.

In this case, Barack Obama blessed Israel by preventing the UN Security Council from dividing the land, and so we were blessed as a result.

But of course there have been many other instances over the past several decades when we have been cursed as a nation for attempting to take steps toward the division of the land of Israel.  One of the most notable instances took place in 1991 when George H. W. Bush got the Israelis and the Palestinians together for the very first time to discuss the dividing of the land of Israel into two states… 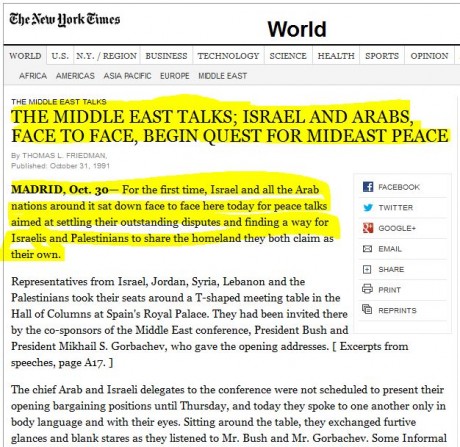 At that conference, the New York Times reported that Bush told Israel that “territorial compromise is essential for peace”.  Needless to say, this upset a lot of people…

At the exact same time that conference was going on, the “Perfect Storm” was raging in the North Atlantic.  Three major storms merged together, and instead of canceling one another out, they formed the kind of storm that is normally only seen once in a lifetime.  If you will remember, Hollywood made a big blockbuster with George Clooney that was based on this storm.  This gigantic storm went 1000 miles the wrong direction and slammed directly into the home of George H. W. Bush while he was at the Madrid conference talking about the need to divide the land of Israel… 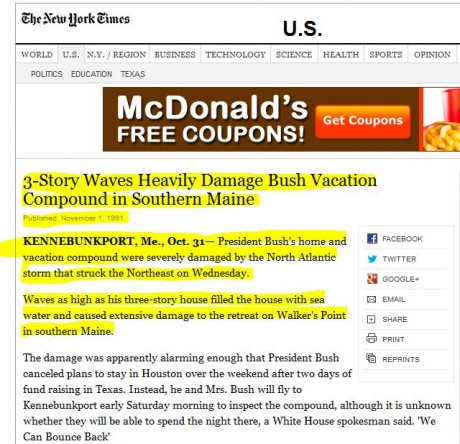 Another very notable example of this phenomenon came in 2005.  At that time, George W. Bush (the son of George H. W. Bush) had convinced Israel that it should pull all of the settlers out of Gaza and turn it entirely over to the Palestinians.  According to the New York Times, the last of the settlers was evacuated on August 23, 2005… 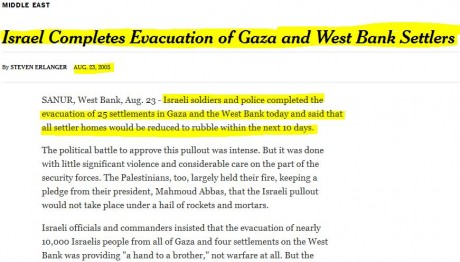 On that exact same day, a little storm that came to be known as Hurricane Katrina formed over the Bahamas.  It shocked forecasters by turning directly toward New Orleans, and it ultimately became the costliest natural disaster in all of U.S. history up until that time.

There are dozens more examples like this, and men like John McTernan, William Koenig and David Brennan have done a great job documenting them.

Today, 137 nations have already recognized a Palestinian state.  The holdouts are mostly in North America and Europe…

France and most of the rest of Europe have been eager and ready to recognize a Palestinian state for quite a while now, but they don’t really want to move forward without the United States.

And of course they can’t officially do anything at the UN Security Council without U.S. approval.

Barack Obama had been hoping to achieve something through direct negotiations between the Israelis and the Palestinians, but those totally broke down and there is no hope that there will be any new negotiations any time soon.

So Barack Obama knows that his only shot at “leaving a legacy” in the Middle East is at the United Nations, and earlier this year he said that a UN Security Council resolution that would recognize a Palestinian state was “on the table” for the very first time… 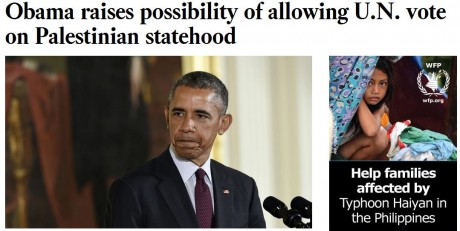 At that time he did not indicate which way that he would go, and although there have been rumblings that something might happen, he has not taken any action yet.

But now time is running out for Obama, because his term is scheduled to end on January 20th.  The advocates of a “two state solution” are becoming increasingly desperate, because they know that Donald Trump has already promised not to support a UN Security Council resolution that would divide the land of Israel.  So they know that if something is going to be done, it has got to be done now.

So the next month is absolutely critical.  The UN Security Council still has time to take action while Obama is still in office, and we know that such a move is actively being considered.  For much, much more on this, please see the following articles that I have recently authored…

If we can get to January 20th and the land of Israel has not been divided by the UN Security Council and Donald Trump successfully takes office, perhaps our reprieve will be extended for a while.

But if Barack Obama very foolishly allows the land of Israel to be divided at the UN Security Council before January 20th, the “pause button” will be unpaused, our blessing will be turned into a curse, and all hell will break loose in America.

Previous Welcome to the Manipulated States of America