The Republican-backed bill failed by a margin of 50-47, far short of the 60 votes needed to defeat a filibuster. GOP Senators Mike Lee (Utah) and Tom Cotton (Arkansas) surprisingly voted against Trump’s plan. Lee is considered a fiscal hawk, while Cotton is considered one of the Senate’s most conservative members when it comes to immigraiton. Democrat Joe Manchin (D-W.VA) supported the GOP-backed measure.

Senate Republicans also blocked the Democrats’ stopgap measure to end the partial shjutdown, voting 52-44 on the legislation, also short of the 60 votes needed to defeat a filibuster. Six Republicans crossed the aisle to vote for the bill, including Utah Senator Mitt Romney.

The vote came after the Senate also rejected a White House-backed proposal on Thursday that would have exchanged reopening the government for $5.7 billion for the wall. It would have allowed Deferred Action for Childhood Arrivals (DACA) recipients and some Temporary Protected Status (TPS) holders to apply for a three-year extension of some legal protections, but included new restrictions on asylum seekers. –The Hill

The two failed votes in the Senate all but guarantees that the partial government shutdown will stretch into next week, while more than 800,000 federal workers will miss their second paycheck on Friday. 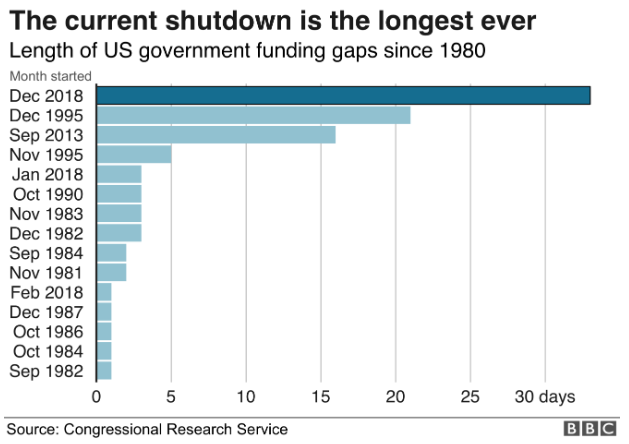 Last month the Senate passed a continuing resolution (CR) that would have prevented the partial shutdown and funded operations until February 8, however it was ill fated after President Trump said that he would not sign any legislation that did not include $5.7 billion for his border wall.

Either measure would have reopened federal agencies and paid 800,000 federal workers who are furloughed or being forced to work without pay, and who will apparently miss another paycheck this week.

Republicans would couple ending the 34-day shutdown with $5.7 billion for Trump’s coveted border wall and revamping some immigration laws, including one provision that would bar minors from applying for asylum at the US border.

Instead, they would have to apply in their own countries and remain there until the feds decided their fates — an idea Democrats called “a poison pill.”

The GOP bill would also give temporary protection to Dreamers, protections the president had taken away.

The Democrats’ bill would have reopened federal agency doors for three weeks while bargainers seek a budget accord.

Twin defeats might spur the two sides into a more serious effort to strike a compromise.

Don’t count on it when it comes to wall funding, but there will most assuredly be a compromise somewhere down the road, and the American people will be on the losing side of the stick.  Watch and see.

Trump has said over and over that he is not going to sign legislation without funding for a border wall and even issued a threat of declaring a state of emergency, something I think that is unconstitutional, to build the wall.  He is remaining steadfast in his stance to not cave to the pressure that is mounting since he promised America a wall on the southern border.

Without a Wall there cannot be safety and security at the Border or for the U.S.A. BUILD THE WALL AND CRIME WILL FALL!

Nancy just said she “just doesn’t understand why?” Very simply, without a Wall it all doesn’t work. Our Country has a chance to greatly reduce Crime, Human Trafficking, Gangs and Drugs. Should have been done for decades. We will not Cave!

Well, if you can’t even get the votes for this to pass, what makes you think you’re gonna get two-thirds to override the veto Senator Schumer?

Additionally, Commerce Secretary Wilbur Ross didn’t think it a big deal for federal workers who weren’t being paid to go to food banks or take out federal loans against money they will be paid, much of it for doing nothing, that is federally guaranteed.

“The obligations that they would undertake – say borrowing from a bank or credit union – are in effect federally guaranteed,” he told CNBC.  “So the 30 days of pay that people will be out – there’s no real reason why they shouldn’t be able to get a loan against it.”

In response, House Speaker Nancy Pelosi (D-CA) said, “Is this the ‘let them eat cake’ kind of attitude, or ‘call your father for money?'”

Nancy Pelosi responds to Wilbur Ross: "Is this the 'let them eat cake' kind of attitude, or 'call your father for money?'" Via ABC pic.twitter.com/2qOpT4472P

He went on to clarify his statements saying that he is “painfully aware that there are hardships inflicted on the individual workers.”

“All I was trying to do is make sure they’re aware there are possible other things that could help somewhat mitigate their problems,” he added.

Well, I’ll go one further.  Why don’t these people, knowing the predicament that is taking place, begin to look for new jobs?  It’s clear that a vast majority of them are not needed since things are functioning just fine in the real world.  Perhaps some of these people could start their own business or find other employment besides in the tyrannical beast system of the federal government.

It’s not that I’m not sympathetic to their situation.  I am, but I’m also fed up with a bloated, unconstitutionally funded and spending federal beast.  Aren’t the rest of Americans?

Next Nutty Bald Woman At DC Women's March: "We Should Give In To Fear, Not Logic" (Video)