The left-wing of American politics is completely deranged and each new day they give us more evidence proving just how out of touch they are.

The latest example of the insanity comes from my beloved home state of Georgia where a public school teacher was filmed acting like a deranged lunatic and comparing pro-Trump t-shirts to Nazi paraphernalia.

Suffice it to say that Orletsky is in the clear minority in her community, which makes her outburst all the more incredible.

In the video, Orletsky can be heard saying, “You cannot wear a swastika to school … you cannot wear ‘Make America Great Again’ like that…. Please go, at least for this class. I don’t care what you do in other classes.”

When one of their classmates incredulously asks, “Wait so both of them have to like flip their shirts inside out because it says Trump on the top?”, the teacher begins to realize that she’s just made a terrible mistake but then makes the situation worse by comparing Trump’s campaign slogan to Nazi accoutrements. “Because it says ‘Make America Great Again! The Neo-Nazis … I’m not saying about Trump, but the slogan…” The teacher argued that the shirts were inappropriate because they reminded her of Neo Nazis! 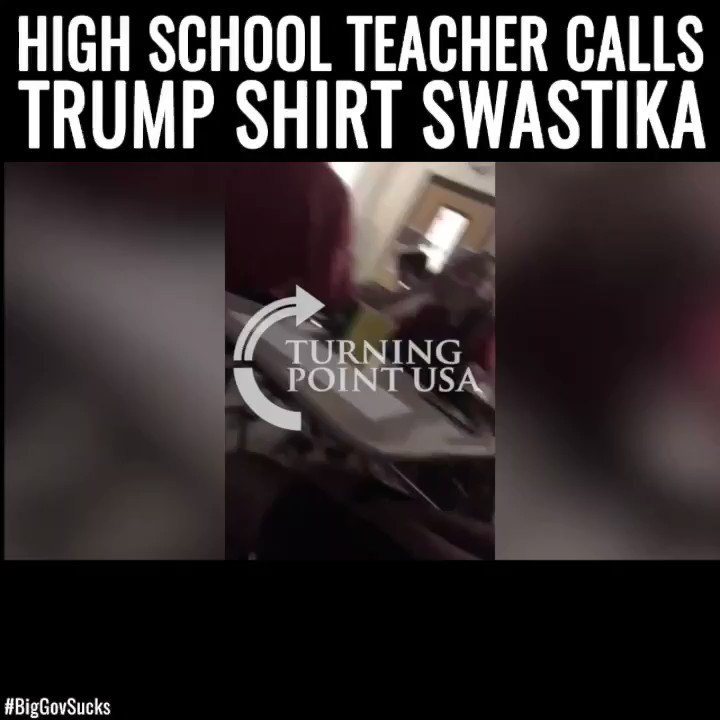 High school teacher calls Trump shirt a “swastika” and makes him take it off in class!

In the aftermath of the incident, the Cherokee County School District has profusely apologized to their students and their families for the teacher’s innapropriate behavior. In a statement, the district said, “Her actions were wrong as the ‘Make America Great Again’ shirts worn by the students are not a violation of our School District dress code.” The district also chastised the teacher for also  inappropriately sharing “her personal opinion about the campaign slogan during class.”

Further, the district said that the school’s principal had met with and apologized to the students in the class and their families. Meanwhile, Superintendent Dr. Brian V. Hightower said that ‘he is deeply sorry that this incident happened in one of their schools, and that “it does not reflect his expectation that all students be treated equally and respectfully by our employees.”‘

Previous The World Chooses Sides: The US Dropped Bombs at the North Korean Border

Next Muslim who attacked cops with sword while screaming “Allahu Akbar”: “Queen and her soldiers will all be in hell fire”