Tired of “playing defense?” Are you asking yourself, “When do we get to go on offense?” This reminds me of an old high school cheer from football games….”Hold that line” ….shouted over and over to the defensive players to keep the opposing team from scoring. Does it seem to you that the Constitutionalists (Tea Partiers, Conservatives et al) are stuck on playing defense all of the time?

I think that is our role. You see we aren’t the ones trying to forcefully impose our will on others. We are the ones trying to stop the force of government from imposing unconstitutional impositions on all of us. Obama complains that to him the Constitution is made of “negative” liberties.” He wants to create the rules and not be held back by limits. Protecting liberty is a defensive position. It is a line in the sand. It is saying to collectivists, “No, you can’t steal from others to redistribute wealth to those who don’t earn it.” Obama and his cronies don’t agree.

It does seem that we are always yelling, “No!” “Stop that!” Which is where the leftists get the idea to call Republicans “the Party of No.” The Constitutional limits of government are well laid out for us to follow. It’s just that leftists (Using that word today to include Democrats, Socialists, Communists, Fascists, and all subterranean versions of these.) don’t understand limits. Give them a rule to limit their reach into someone’s wallet and they will spend the rest of their lives trying to get around it. Tell them they can’t take someone’s property away to suit their collectivist schemes, and they will make up horror stories to justify the taking anyway. Tell them the Constitution does not allow them to forcefully take money from a Church or unwilling Christian to pay for abortions, and they say, “Oh, yes we can,” and then proceed to enact laws to do just that.

And there you are…Obama’s theme chant, “Yes we can!” While we are saying, “No, you shall not,” because “you are not allowed to do that under the rules of the U.S. Constitution. Now it is “Forward!” I think that is what so many people missed the first go ’round with this guy. They heard, “Yes we can,” and misinterpreted that to mean, “The first black guy can be President and isn’t that grand!” Most people (obviously speaking generically here) just weren’t hearing his real message which was: “Yes, I can do anything I want and the Constitution be damned.” The underlying theme of that, the theme that most Americans wanted to hear, was that blacks can be rulers and not the downtrodden slaves of white masters. Holy frijolés folks….as if affirmative action didn’t already give them more advantages than whites for decades? This was the racist assertion that Americans got sucked into in that 2008 election, never even looking at the policies B.O. was intending to force down our throats.

As I watched the DNC in Charlotte, I kept thinking how cloaked the language was. No one seems to care what “Forward” means. Just like no one cared what Hope and Change actually represented in 2008. It just sounds nice. 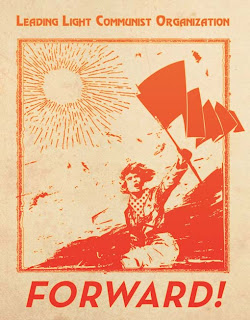 The slogan “Forward!” reflected the conviction of European Marxists and radicals that their movements reflected the march of history, which would move forward past capitalism and into socialism and communism.
Vladimir Lenin founded the publication “Vpered” (the Russian word for “forward”) in 1905. Soviet propaganda film-maker Dziga Vertov made a documentary whose title is sometimes translated as “Forward, Soviet” (though also and more literally as “Stride, Soviet”).

I’ve been reading a biography of Alger Hiss that recounts the Communist infiltration of our government and universities during the 1930’s, ’40’s, and 50’s. It was a walk in the park for the Soviets and American Communist allies. The Roosevelt “New Dealers” were all Communist leaning ideologues. Hiss and many of these people came walking into high government positions straight out of Harvard, Columbia, and other supposedly respected universities. The recruiters were active in those universities, picking out the students and post-graduate interns who were sympathetic to the cause. And by the way, these folks had connections to print media like crazy during those days, which is another reason McCarthy was and still is smeared by media. (Since then, the media has continually been involved in selling Communism, with cloaked and perfumed language here in America.) While a generation has passed, I believe these and other universities devise the rotten core of where Communist ideology is fostered in our nation. Look at Clinton, Bush, Obama and ask yourself how did they get into power? (All Harvard and Columbia) Most of the Hiss generation Communists were law graduates (lawyers) – a la both Clintons and both Obamas. (Which may be why Clint Eastwood said he never thought it was a good idea to have lawyers in the White House.) We know today that most colleges and universities are selling leftist rubbish to the students. It may be that there are not the underground Communists in positions in these universities. today. Today they don’t have to be underground….just blatantly selling anti-American rotgut to our youth. What was subversive then, is now right out in the open, in your face, total acceptance of Communism in academia. (note Hilary Clinton’s thesis in tribute to Alinsky.)

When I heard Bill Clinton at the DNC offer up a huge slam at American independence by saying, ” If you want ‘You’re on your own’ government, you should vote for Romney,” I thought, “Wow this guy wants a nation of dependent sheep!” I also thought, “This is straight out of Lenin’s notebook!”

Back to the original premise here….are we always going to play defense against the left’s collectivists schemes? I think so for now. They are coming at us, pushing through us, shoving us down, running over us, and generally putting us in the position of defense. I’m not sure if that will ever change. They can come up with slogans to sway the stupid all day long. It is up to us to “HOLD THAT LINE,” until people stop being this interminably stupid. And at this point, that seems to be a long way off!” 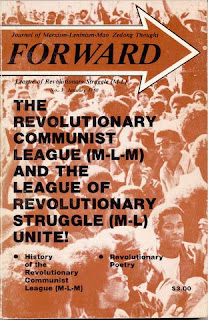 How do you tell people, “No, we do not want to move forward?” ?? That is how clever they are. To use a word that means something good to people, when in fact their policies are backward and tyrannical….that is their forté, i.e. twisting words to mean the exact opposite of what they are doing. The most modern, forward thinking, and successful nation in the world is being taken down by stupidity and sweet sounding, lying words, while those of us who love and rely on the Constitution are saying, “HOLD THAT LINE!”

Previous Michelle Obama: That's Not On The Menu

Next Obama To UN: 'The Future Must Not Belong To Those Who Slander The Prophet Of Islam'