[The following originally appeared at LibertyUnyielding.com, and has been reprinted with permission.]

It’s an obvious suspicion: that there may have been higher-level intervention here.

At the end of May, President Trump tweeted out video footage of more than 1,000 migrants rushing in from Mexico via what looked like a breach in the border wall near El Paso.

Yesterday, Border Patrol agents apprehended the largest group of illegal aliens ever: 1,036 people who illegally crossed the border in El Paso around 4am. Democrats need to stand by our incredible Border Patrol and finally fix the loopholes at our Border! pic.twitter.com/6K1rIUzorM

Although it seemed to be some kind of breach at the time, later information from Brian Kolfage, the Air Force veteran spearheading the crowd-funded We Build the Wall effort, indicated that a border agency was routinely leaving gates open in the wall sections along that stretch of the border.

Border patrol agents tipped us off that wall gates In Texas are being left open everyday randomly by a federal agency and now we have video of illegals coming through these gates that should be locked up!!!

The agency in question is the International Boundary and Water Commission (IBWC), a treaty-chartered entity of the U.S. and Mexico dating to the 1880s.  IBWC’s portfolio today is mostly about administering the water agreements between the U.S. and Mexico.  From its offices in El Paso, the U.S. element of the IBWC supervises that administration on behalf of the United States.  There is a counterpart element in Mexico.

It may not be 100% certain that the huge gate-rushing event caught on video was the result of IBWC-supervised personnel leaving a gate open.

But after a tense 24 hours this week, it’s a good bet.

As LU reported previously, the first section of We Build the Wall’s privately-funded structure was completed in May near Sunland Park, New Mexico.  There’s a gate in the section, which We Build the Wall began to lock in June.

This is what border security looks like! @WeBuildtheWall built the Cadillac of walls. Look at that LED lighting, same lights that are in football stadiums!

On June 11, the IBWC posted a memo on its website announcing that the gate would be left open.  The privately funded wall, said the memo, had not been properly permitted, and it would not be allowed to perform its function until the IBWC was satisfied with its paperwork.

Apparently an international organization has @CBP & @DHSgov by the balls! They can’t even secure their own border without this org telling them to screw off. IBWC @harkjay350 is the real DHS secretary #OWNED #WhosYourDaddy @RyanAFournier @DrPaulGosar @NeilWMcCabe2 @Rambobiggs pic.twitter.com/tFeESB5OPF

Brian Kolfage reported that the locked gate was forcibly unlocked (by deputies from the local sheriff’s department, at the direction of IBWC), and was then locked in the open position.

The IBWC is half owned by Mexico We just had an entity 50% owned managed by Mexico open our gate using American police as muscle. Mexico just opened all gates In El Paso sectors by way of IBWC. @harkjay350 needs to RESIGN NoW!

The IBWC locked our gate wide open to allow illegal aliens in to the United States. Last night cartels from Mexico tried to enter. The IBWC is anti @realDonaldTrump and they leave all border gates open. We have many videos of them leaving gates open for illegals like this one. pic.twitter.com/VmidkLVcaj

IBWC cited inability to access water infrastructure and border monuments (lying outside the wall, directly on the international boundary) in its news release about requiring the gate to remain open.  Kolfage offers counterarguments to these points in his tweet stream.

Note that all of the discussions purpose of this organization is ONLY water allocation. Our wall is not on water has nothing to do with the flow or control of water and sits next to their barbed wire fence. The IWBC and @harkjay350 are overstepping @realDonaldTrump and @DHSgov

This is how you know the ACLU and Sunland Park are lying about access to monument 1. Here’s a 2017 article about our land owners controlling the private property access. LIE LIE LIE, we will win win win again! https://t.co/orZpMXIcsx@Rambobiggs @StumpforTrump @gatewaypundit

But later the same day, the IBWC reversed itself and announced, in a follow-on memo with almost identical wording, that the gate was to be locked (shut) at night.  The memo doesn’t make it entirely clear that locking the gate at night means locking it shut, but Brain Kolfage did.

Our border wall & gate are secure again and we still have not had a single breach. I want to thank the IBWC for acting swiftly and we look forward to working with you on our future projects! @RyanAFournier @Rambobiggs @sethweathers @gehrig38 @SaraCarterDC @StumpforTrump pic.twitter.com/uD8rhB4P7L

The IBWC homepage was also just a shade more forthcoming. 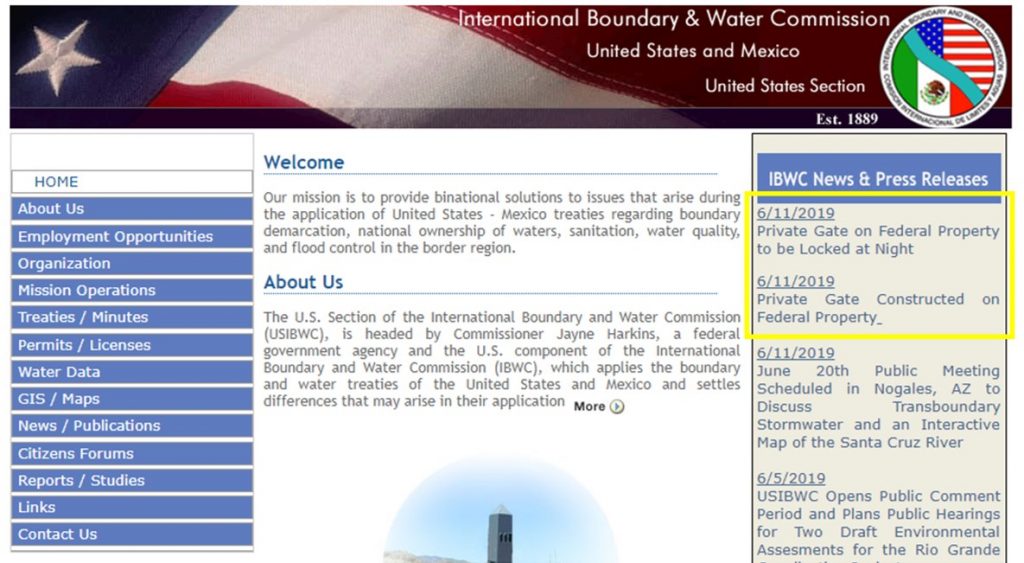 The second memo’s uninformative tone comes off as a trifle peevish.  One theory would be that the IBWC was overruled on its gate-locking decision.  The original decision may or may not have been made in consultation with the State Department, with which the IBWC maintains a permanent liaison office.  Either way, it’s a good question whether the abrupt, almost immediate reversal on locking the gate – locking it shut at night, instead of permanently open – was directed from a level that outranks everyone else involved; i.e., the White House.

Previous If Voting Rights Were Based on a Merit System, Republicans Would NEVER LOSE

Next Bernie Sanders speaks for Americans, says we'd be 'delighted' to pay more in taxes