I posted my personal experiences on Obamacare, as well as those of a reader, in Obamashock! – Navigating Obamacare Costs – My Personal Experience on Healthcare.gov.
Just in case anyone thought “ObamaShock!” was an isolated incident, the Weekly Standard reports Millions of Americans Are Losing Their Health Plans Because of Obamacare.

While the Affordable Care Act was making its way through Congress in 2009 and 2010, President Obama famously promised the American people over and over again that if you like your health plan, you can keep it.

But the president’s promise is turning out to be false for millions of Americans who have had their health insurance policies canceled because they don’t meet the requirements of the Affordable Care Act.

Because the Obama administration’s regulations on grandfathering existing plans were so stringent as many as 16 million are not grandfathered and must comply with Obamacare at their next renewal.

Millions of people are now receiving letters from their carriers saying they are losing their current coverage and must re-enroll in order to avoid a break in coverage and comply with the new health law’s benefit mandates––the vast majority by January 1. Most of these will be seeing some pretty big rate increases.

As technical failures bedevil the rollout of President Obama’s health care law, evidence is emerging that one of the program’s loftiest goals — to encourage competition among insurers in an effort to keep costs low — is falling short for many rural Americans.

While competition is intense in many populous regions, rural areas and small towns have far fewer carriers offering plans in the law’s online exchanges. Those places, many of them poor, are being asked to choose from some of the highest-priced plans in the 34 states where the federal government is running the health insurance marketplaces, a review by The New York Times has found.

Of the roughly 2,500 counties served by the federal exchanges, more than half, or 58 percent, have plans offered by just one or two insurance carriers, according to an analysis by The Times of county-level data provided by the Department of Health and Human Services. In about 530 counties, only a single insurer is participating.

“There’s nothing in the structure of the Affordable Care Act which really deals with that problem,” said John Holahan, a fellow at the Urban Institute, who noted that many factors determine costs in a given market. “I think that all else being equal, premiums will clearly be higher when there’s not that competition.”

The Obama administration has said 95 percent of Americans live in areas where there are at least two insurers in the exchanges. But many experts say two might not be enough to create competition that would help lower prices.

Politico reports “The online website signup procedure is such a disaster that President Barack Obama is urging Americans to go ahead and try to get health coverage by mailing in a paper application, calling the helpline or seeking help from one of the trained “assisters.”“

But the truth is those applications — on paper or by phone — have to get entered into the same lousy website that is causing the problems in the first place. And the people processing the paper and calls don’t have any cyber secret passage to duck around that. They too have to deal with all the frustrations of HealthCare.gov — full-time.

“We’re confident by the end of November, HealthCare.gov will be smooth for a vast majority of users,” said Jeff Zients, the former White House aide and management expert brought into oversee the repair drive.

But for now, with HealthCare.gov crippled by design flaws and a morass of messy code, the president and health officials have been using a variety of posts and announcements to urge people to try low-tech ways of enrolling. Basically they are saying while the front door is stuck, try the side.

Of course, reading an 800 number on national TV — as the president did in the Rose Garden the other day — created a flood of callers who couldn’t get through. That led to another wave of frustration and Obamacare punch lines. But Health and Human Services Secretary Kathleen Sebelius tweeted on Thursday that HHS bulked up the call center to include more than 10,000 trained representatives.

Even before the tech problems, the government had a private contractor, Serco, to handle paper applications, which were expected to come primarily from less Web-savvy people. On Thursday, the company’s program director John Lau told the House Energy and Commerce Committee that it had completed between 3,000 and 4,000 applications.

But Serco will be flooded with paper applications if the website glitches persist, predicted John Gorman, founder of the Gorman Health Group, which has advised some of the insurance exchanges. “Serco is going to be swimming in paper within the next two to three weeks,” he said.

Inquiring minds looking for the most telling and colorful comments made about Obamacare “glitches” can find them on Politico. Here’s a particularly funny one. 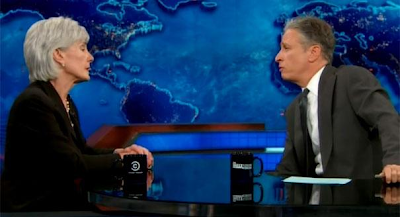 “We’re going to do a challenge. I’m going to try and download every movie ever made and you are going to try to sign up for Obamacare — and we’ll see which happens first.” — Jon Stewart to Secretary Kathleen Sebelius on “The Daily Show,” Oct. 7

Nonetheless Obama insists the Obamacare show must go on. And what a horror story it is.

Next A Welcome US / Saudi ‘Reset’

Mike Shedlock / Mish is a registered investment advisor representative for SitkaPacific Capital Management. Mish also writes on economics in the world at Global Economic Analysis. He currently does fundraising to benefit ALS (Lou Gehrig's Disease) research, which claimed the life of his wife of 27 years, JoAnne, in May of 2012. When not writing about stocks or the economy Mish spends a great deal of time on photography and in the garden. He has over 80 magazine and book cover credits. Some of my Wisconsin and gardening images can be seen at MichaelShedlock.com.