The U.S. government sharply increased the number of green cards for Middle Eastern immigrants from countries such as Afghanistan and Iraq in 2014, newly released data from the Department of Homeland Security shows.

In 2014 — the most recent year for which this data is available — the U.S. awarded green cards to 103,901 immigrants from countries in the Middle East, entitling them to permanent legal status, federal benefits and a direct path to citizenship. That’s a 32 percent increase from the 78,917 green cards to Middle Eastern immigrants awarded in 2013, and a 56 percent increase from 2001.

The biggest benefit went to immigrants from Afghanistan, Iraq and Pakistan. Nearly five times as many Afghan immigrants obtained green cards in 2014, compared to 2013, and the number of green cards awarded to Iraqi nationals more than doubled. Green cards issued to Pakistani immigrants increased by a third. (RELATED: US Will Issue 10 Million Green Cards In The Next Decade)

The sharp increase in the total number of green cards awarded to Middle Eastern immigrants is illustrated in a chart obtained by The Daily Caller News Foundation from the Senate Subcommittee on Immigration and the National Interest, chaired by Republican Sen. Jeff Sessions. 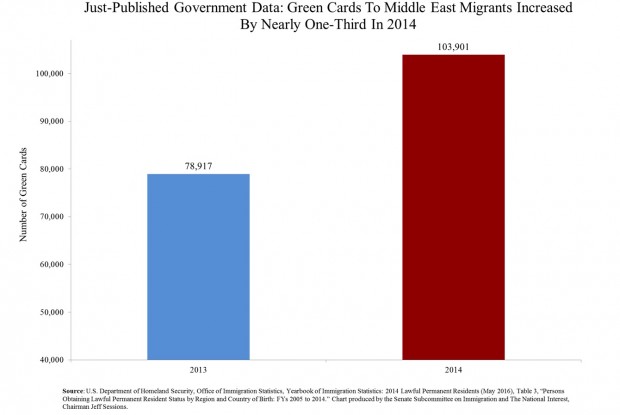 (Senate Subcommittee on Immigration and the National Interest)

DHS published the 2014 data just last week, and has not yet released data for Fiscal Year 2015.

Previous They Canceled the Lord’s Prayer at this School’s Graduation, And Then This Happened

Rachel is a reporter at The Daily Caller News Foundation & contributor to FreedomOutpost.com.