New York mayor Michael Bloomberg just cannot mind his own business. He’s come out in favor of cutting out large sugary drinks in his city, cracking down on smoking, trans fats, salt, called for police to strike until people relinquish their guns and now he’s wanting to stop hospitals from handing out baby formula and persuade new mothers to breastfeed their babies instead.

Now don’t get me wrong here, I agree with health commissioner Thomas Farley that “Human breast milk is best for babies and mothers,” but to then turn around and keep baby formula under lock and key like medications is going a bit too far don’t you think? I mean it isn’t as though baby formula is banned…yet.

Farley also commented, ‘With this initiative the New York City health community is joining together to support mothers who choose to breastfeed.’

Trending: Evidence that Andrew Breitbart May Have Been Murdered to Conceal #Pizzagate 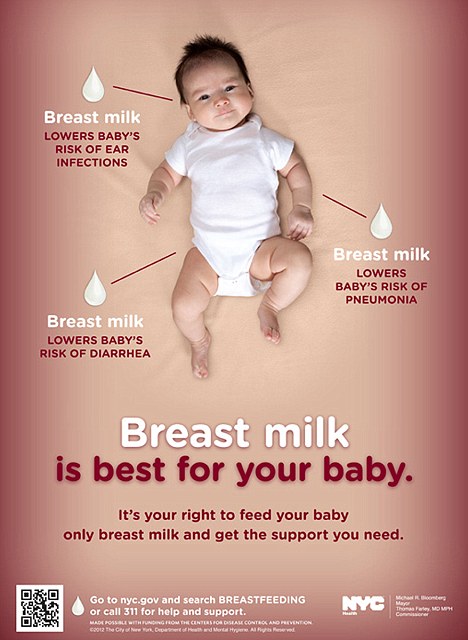 “Baby-Friendly Hospital Initiative” as it’s being referred to promotes “The benefits of breast feeding to infants, mothers and society are well established . . . Specifically, infants exclusively breast fed for at least six months have a 22 percent reduction in risk for childhood obesity.”

Bloomberg is hoping the plan will spread to between 24-36 hospitals. Those hospitals can apply for federal funding to participate in the program to obtain support and technical assistance and earn the designation as a “Baby-Friendly” facility.

Well isn’t that wonderful? I mean hospitals can promote what comes naturally, a mother feeding her own child from her own body, and if they do this they get more of tax payers hard earned money. Now isn’t that sweet? Talk about being on the government tit!

Incidentally this is also part of the push of First Lady Michelle Obama in her “Let’s Move” campaign to reduce obesity and is also sponsored by the World Health Organization.

As a father of nine my wife has always breastfed our children. There was a time or two where they needed formula simply because there was no milk being produced. But to have nanny mayor Bloomberg telling mothers what is best for them and their babies is not what government should be doing and just demonstrates how even incompetent ‘boobs’ can get into office. Stay tuned to FreedomOutpost.com to keep you ‘abreast’ of the developing situation.