While the presumptive nominee of the Republican party Mitt Romney is saying he is for marriage being defined as between a man and a woman, so let’s see if that is a consistent position that he has held.

When he first became governor he opposed same-sex marriage and civil unions, at least in what he said. However, he was in support of domestic partnership benefits and the right of homosexual couples to adopt children.

The Supreme Court ruled in favor of the plaintiffs, 4-3, stating that the state, “deny the protections, benefits and obligations conferred by civil marriage to two individuals of the same sex who wish to marry.”

Chief Justice Margaret Marshall in writing for the majority wrote, “affirms the dignity and equality of all individuals. It forbids the creation of second-class citizens,” the state had no “constitutionally adequate reason for denying marriage to same-sex couples,” and “The right to marry is not a privilege conferred by the State, but a fundamental right that is protected against unwarranted State interference.”

The ruling led to the state issuing marriage licenses to same-sex couples with 180 days. So I am wondering how the Chief Justice could make the statement that, “The right to marry is not a privilege conferred by the State” and at the same time the state provide marriage licenses at a cost! If the state cannot provide the “privilege”, but it is considered a “fundamental right”, then no licenses should be issued and no money for those licenses taken.

I bring this up of how things transpired during then Governor Romney’s tenure. After this ruling Romney was faced with choosing between same-sex “marriage” or civil unions. While he backed a February 2004 amendment that would have banned same-sex “marriage” but allow civil unions, he did so thinking it would be the only way to ban same-sex marriage in Massachusetts. “My view is that marriage should be defined as a relationship between a man and a woman, ” Romney said, expressing a position he has advocated consistently.” Some thought he was doing this in preparation at presenting himself as a conservative candidate for president.

In describing his disagreement with the Court’s decision Romney said, “Something so fundamental as marriage should be decided by the citizens and not by the court and a one-justice majority.” I agree, only I believe the Bible defines marriage, not the state and not necessarily the citizens.

However, just a few months later, in May, he began having town clerks to issue marriage licenses to same-sex couples, though he barred non-residents of Massachusetts from obtaining a marriage license. Again, if this is a fundamental right and not a privilege of the state, why the licensing?

Later in June of 2005, Mitt Romney abandoned his support for the amendment he reluctantly backed in 2004. He then began to support a petition effort led by the Coalition for Marriage & Family that would have banned same-sex “marriage” and made no provisions for civil unions.

So all of this sounds good doesn’t it? It sounds like the man is conservative on this issue and that he is just caught between a rock and a hard place, right? Well let’s compare all of this to other things he has done and said and let’s see if Mitt Romney actually has a core moral compass on this issue or if he is just politicking.

Mitt Romney refused to endorse the original 2002 Massachusetts constitutional amendment that defined marriage as between one man and one woman. He called it “too extreme” because he though it would outlaw domestic partnerships for homosexual couples.

In answering a question concerning the Boy Scouts of America and whether they should allow homosexuals in the organization, Romney supported the Scouts in determining that, but at the same time said that anyone should be allowed to participate, regardless of sexual orientation. That is called straddling the fence.

Romney was observed as, “He is pro-choice and, aside from the marriage debate, generally in agreement with gay-rights advocates,” in the February 2005 issue of the American Spectator.

According to the homosexual magazine “Bay Windows”,

Indeed, years before Romney ran for governor, he took several pro-gay stances in his unsuccessful 1994 Senate campaign against Ted Kennedy. According to an Oct. 17 Boston Globe article that year, Romney courted Mass. Log Cabin for their endorsement, promising them in a letter that, “as we seek to establish full equality for America’s gay and lesbian citizens, I will provide more effective leadership than my opponent.” Romney won that endorsement, in part due to his support of the federal Employment Non-Discrimination Act (ENDA).

During that race Romney also won Republican Gov. William Weld’s endorsement, and he said he was in step with the famously pro-gay governor on many issues, including same-sex marriage. According to an Oct. 21 article in the Globe, when Romney was asked whether he supported same-sex marriage, he answered, “I am sure [Weld] will study it and evaluate it and I will endorse his position on that.” (At the time Weld had not come out in favor of same-sex marriage, but he has done so since the Goodridge decision. No such endorsement of Weld’s position by Romney has been forthcoming.)

Romney also went to great lengths to dispel charges of homophobia leveled against him for his role as a lay leader in the Mormon Church. A July 15 Globe article alleged that Romney had told a congregation of about 300 Mormons that same-sex relationships were “perverse” in November 1993. Romney’s campaign responded with a statement saying that Romney respected “all people regardless of their race, creed, or sexual orientation” and that he would fight against “discrimination of any kind.” 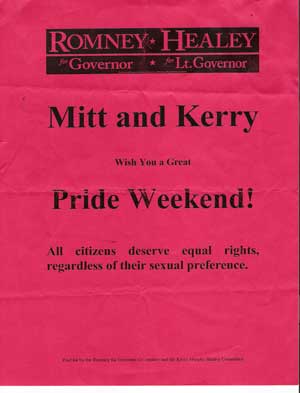 During his 2002 gubernatorial run his campaign distributed bright during Pride that declared “Mitt and Kerry wish you a great Pride weekend! All citizens deserve equal rights, regardless of their sexual preference.”

According to MassResistance.org, Mitt Romney is a supporter of homosexuals and “homosexual rights”, which apparently are different than “everybody else rights.”

“His harsh criticism of what he calls ”judicial over-reaching” always wins applause from Republican audiences. But the governor has at times taken pains to promote tolerance of gays and lesbians. When an administration official was dismissed and asserted that the action was related to her intention to marry her lesbian partner, Romney strongly denied it and noted that several high-ranking officials in his administration were gay…. The applications Romney approved from same-sex couples included at least four from state legislators, including Jarrett T. Barrios, a state senator from Cambridge, members of the clergy from out-of-state, family members, and friends …”

Does this sound like a man who really wants to oppose homosexuality and homosexual “marriage”? Or is it more than likely that Mitt Romney is just very slick when it comes to his speech concerning the issue and that he is basing his opposition to homosexual “marriage” on political expediency and not principle?

Romney’s meeting with Log Cabin Club members in October of that year [2002], less than a month before the gubernatorial election, led members to believe he was not morally opposed to gay marriage. “He said, `Right now, it’s not popular, and it would cost money,’ ” he said. “He didn’t say, when we met with him, `I’m sorry, folks; I’m against gay marriage because it’s morally wrong.’ He didn’t say that.” [said David Rogers, vice-president of Log Cabin Club.]”

I’m not sure where Mitt Romney stands on the issue. It seems his thinking is so convoluted here. However, one thing seems clear: He is not clear. It seems that quite possibly his stance on this issue may very well be similar to Barack Obama’s and that it will evolve as the popularity of the issue evolves. However, if he is elected President, don’t go thinking that he will stand up to any Supreme Court decision on the matter as he has already demonstrated a lack of ability to challenge the Supreme Court in the state he governed on the issue.

This will be a first in a series where we’ll take a look at the presumptive nominee and see if he is actually conservative at all on the issues.

Next Congress Calls Out DOJ On Fast And Furious Wiretaps