Don’t worry – even though the employment numbers are terrible the mainstream media insists that everything is going to be wonderful for the U.S. economy in the months ahead.

According to the Bureau of Labor Statistics, the U.S. economy lost 33,000 jobs during September.

That was the first monthly decline in seven years, and as you will see below, overall 2017 is on pace for the slowest employment growth in at least five years.

But the Bureau of Labor Statistics insists that the downturn in September was due to the chaos caused by Hurricane Harvey and Hurricane Irma, and they are assuring us that happier times are right around the corner.

Economists were projecting that we would see an increase of around 80,000 jobs last month, and we need to add at least 150,000 jobs each month just to keep up with population growth.  So the -33,000 number was a huge disappointment.

But even though we lost 33,000 jobs last month, the Bureau of Labor Statistics says that the unemployment rate fell from 4.4 percent to 4.2 percent.

Yes, I know that doesn’t make any sense at all, but that is what they are telling us.

Perhaps if several volcanoes go off inside this country, terrorists detonate a dirty bomb in one of our major cities and Godzilla invades the west coast next month the unemployment rate will drop all the way to zero.

Of course, I am being facetious, but I just want to point out the absurdity of what we are being told.  There is no way in the world that the official unemployment rate should be at “a new 16-year low”.

In the end, perhaps September will end up being a bit of an anomaly.  But as I mentioned above, we have been witnessing a broader trend build for months.  According to CNBC, we are on pace for “the slowest jobs growth in at least five years”…

Let that sink in for a moment.

Employment is not booming.  In fact, things haven’t been this slow “in at least five years”.  An economic slowdown is here, and yet most people are totally oblivious to what is happening.

And let me share something else with you.  The following chart shows the average duration of unemployment since the late 1940s… 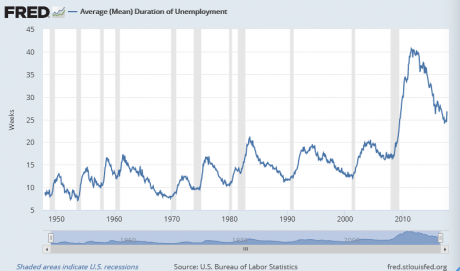 This chart shows that workers remain unemployed far longer than they did in the “good old days”, but I want you to pay special attention to the very end of the chart.

The duration of unemployment is really starting to spike up again quite dramatically, and that is a very, very troubling sign for the U.S. economy overall, because spikes in this number almost always correspond with recessions.

But the Bureau of Labor Statistics says that we don’t have anything to be concerned about.  In fact, they are blaming all of the bad numbers from last month on Harvey and Irma…

Our analysis suggests that the net effect of these hurricanes was to reduce the estimate of total nonfarm payroll employment for September. There was no discernible effect on the national unemployment rate.

No changes were made to either the establishment or household survey estimation procedures for the September figures.

For both surveys, collection rates generally were within normal ranges, both nationally and in the affected states.

In the establishment survey, employees who are not paid for the pay period that includes the 12th of the month are not counted as employed.

In the household survey, persons with a job are counted as employed even if they miss work for the entire survey reference week (the week including the 12th of the month), regardless of whether or not they are paid. For both surveys, national estimates do not include Puerto Rico or the U.S. Virgin Islands.

The unemployment rate, which is calculated from a different survey than the headline job totals, edged lower.

That’s because gains in the number of people employed outpaced an increase in the labor force, which includes people working and looking for jobs.

In that survey of households, workers are counted as employed even if they were temporarily idled by the storms.

Hopefully, they are right.

Hopefully, happy times are here again and an economic boom is right around the corner.

Our economic infrastructure has been gutted, we have shipped millions of good paying jobs overseas, the middle class is slowly being eradicated, and we are living in the terminal phase of the greatest debt bubble in human history.

We have been able to maintain our ridiculously inflated standard of living for an extended period of time by borrowing absolutely colossal mountains of money year after year.

But no debt bubble lasts forever, and this one will not either.

The debt-fueled “prosperity” that we see all around us today is an enormous temporary illusion, and when the illusion collapses the economic pain is going to be greater than anything we have ever seen before in modern American history.

Previous You Did Know That You Can Bump Fire Your Rifle Without A Bump Stock, Right?

Next This Video Shows That The Corruption In Washington DC Is Off The Charts!