One day after CNBC aired a report of lawsuit, in which banksters and U.S. racketeering partners are being accused of laundering over $43 trillion, CNBC’s senior vice president Kevin Krim’s children were stabbed to death.

(Marina) Krim had left the two children with the nanny, known as “Josie,” to take her third child, 3-year-old Nessie, to a swim lesson at a nearby YMCA, Kelly said. She had expected to meet the nanny at a dance class for the 6-year-old around 5:30 p.m.

When the nanny and children didn’t show up, Krim went up to the apartment, where she found the lights were off, police said. Krim then returned to the lobby and asked a doorman whether he had seen her two other children leave with the nanny; he had not.

“There comes a time when she goes looking for her children and enters the bathroom and finds her 6-year-old daughter and son stabbed to death in the tub,” Kelly said.

That’s when neighbors heard a scream.

Mrs. Krim had found the nanny, Yoselyn Ortega, 50, on the floor of the bathroom with self-inflicted wounds. She had slit her wrists and began to stab herself repeatedly with a knife in the neck. Something seems amiss here to me as slitting one’s wrists is one thing, but then to add stabbing one’s self in the neck and all of this within 24 hours of a report which could expose major corruption, according to the Intel Hub’s J. G. Vibes, in the highest offices of government and the financial sector.

Screenshots were taken of the CNBC article to verify the story of the lawsuit as reported by CNBC in case it was removed. These can be viewed here. Interestingly enough the article was pulled.

It did contain this information though as seen in the screenshots: 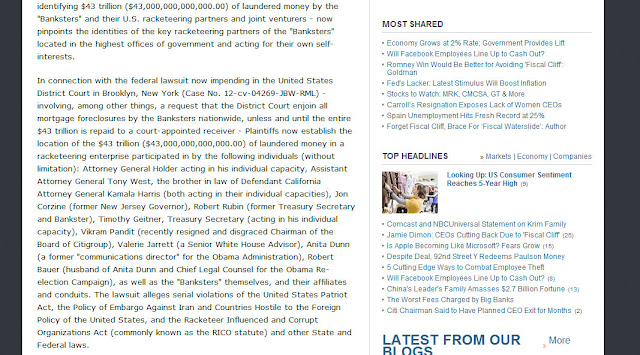 Plaintiffs now establish the location of the $43 trillion ($43,000,000,000,000.00) of laundered money in a racketeering enterprise participated in by the following individuals (without limitation): Attorney General Holder acting in his individual capacity, Assistant Attorney General Tony West, the brother in law of Defendant California Attorney General Kamala Harris (both acting in their individual capacities), Jon Corzine (former New Jersey Governor), Robert Rubin (former Treasury Secretary and Bankster), Timothy Geitner, Treasury Secretary (acting in his individual capacity), Vikram Pandit (recently resigned and disgraced Chairman of the Board of Citigroup), Valerie Jarrett (a Senior White House Advisor), Anita Dunn (a former “communications director” for the Obama Administration), Robert Bauer (husband of Anita Dunn and Chief Legal Counsel for the Obama Re-election Campaign), as well as the “Banksters” themselves, and their affiliates and conduits. The lawsuit alleges serial violations of the United States Patriot Act, the Policy of Embargo Against Iran and Countries Hostile to the Foreign Policy of the United States, and the Racketeer Influenced and Corrupt Organizations Act (commonly known as the RICO statute) and other State and Federal laws.

The complaint – which has now been fully served on thousands of the “Banksters and their Co-Conspirators” – makes it irrefutable that the epicenter of this laundering and racketeering enterprise has been and continues to be Wall Street and continues to involve the very “Banksters” located there who have repeatedly asked in the past to be “bailed out” and to be “bailed out” in the future.

In January of this year, Krim was employed by JPMorgan Chase as a strategy consultant for only 3 months. This happened just prior to his employment with CNBC.

According to court documents regarding the lawsuit, the purpose for seeking legal remedy is:

1. The deceptive coercive methods employed by mega-banks to facilitate injured parties’ participation in loans and mortgages
2. The fraudulent and illegal use of MERS
3. Breach of plaintiff’s statutory rights
4. Purposeful violation of consumer and homeowner protect statues
5. Processing money from unknown sources in contravention of the Patriot Act of 2001
6. Foreclosing upon and accepting monies for assets that do not exist

The lawsuit states that there was a “a systemic fraud on thousands of investors” concerning the mortgage-backed securities first purvey by Bear Stearns, who was later acquired by JPMorgan Chase as part of the US governmental bailout of the banks after the 2008 crash. These securities were sold, according to the lawsuit, willfully and with intent by the seller to defraud and deceive investors. Because the securities were a combination of home mortgages, credit card debt and student loans which were bundled together and sold on the global markets after given a fake triple A rating.

Some of the mega-banks named in the lawsuit are:

Many foreign and overseas banks were named in the suit in conjunction with the mega-banks – pointing to the fact that financial institutions like JPMorgan Chase, Deutsche Bank, and others were using offshore banks to hide their monies acquired by the mortgage-backed securities scam. In essence, these financial institutions took monies from mortgage-holders, funneled it to offshore bank accounts and then after securitizing the loans, took the actual property from the individuals.

She also says that Ortega had begun seeing a psychologist just prior to the murders. She had no criminal history or psychiatric issues. The Wall Street Journal reported, “Friends and acquaintances described Ms. Ortega as a devout Catholic who rarely complained but had recently shown signs of stress, in part through weight loss.”

Ortega has not been charged in the murders as of yet. It all seems highly suspicious in light of the CNBC report.

Previous The Internet Revolution Is A Liberty Revolution

Next Obama Labor Dept May Delay Jobs Report Till After Election