There are some “major concerns” about what the scientists at CERN are doing these days.  The European Organization for Nuclear Research, more commonly known by the acronym “CERN”, is purposely smashing particles into one another at astonishingly high speeds.  Just last month, the researchers working at the facility began a new experiment called “Awake” that uses “plasma wakefields driven by a proton beam” to accelerate charged particles.  On June 24th, pictures of some extremely bizarre “portal-shaped cloud formations” were taken in the area just above the Large Hadron Collider at CERN.  Could it be possible that there is some sort of a connection between this new “Awake” experiment” and these strange cloud formations?  And precisely what do the researchers hope to “awaken” anyway?

Right at the start of this article, I want to make it clear that I am approaching the claims that CERN is making and the claims that their critics are making with skepticism.  I was trained as a lawyer, and so I am not easily persuaded on a matter.  I hope to raise some important questions in this article, but I don’t know that we can come to any solid conclusions on any of this just yet.

AWAKE (the Advanced Proton Driven Plasma Wakefield Acceleration Experiment) will be the first accelerator of its kind in the world. It is currently under construction, but hopes to test the concept that plasma wakefields driven by a proton beam could accelerate charged particles.

The reason why there is such a focus on this experiment is because of the images that were taken of the sky just above the Large Hadron Collider on June 24th.  The following comes from one of the largest news organizations in the UK…

A video claims two images showing cloud and light over the LHC at Geneva on the French/Swiss border were taken on June 24 – the same day CERN scientists began a new Awake experiment to change the way it smashes particles together.

The film, entitled What portal did CERN open now? Strange Clouds Hover Above the LHC, was made by Freedom Fighter Times, a religious conspiracy theory channel on YouTube, and raises “major concerns” about what the LCH is being used for.

You can view YouTube screenshots of the photos in question right here and right here.  Do these photographs appear to be alarming to you?… 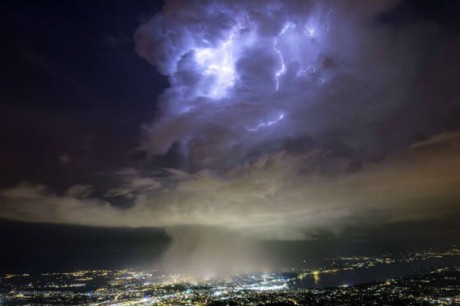 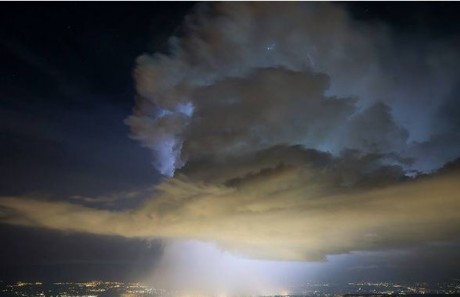 Some people just see normal thunderstorms when they look at these clouds, but others are convinced that they are looking at strange balls of energy and inter-dimensional portals…

According to conspiracy theorists, bizarre clouds that formed on Friday, June 24 (see YouTube below), over the Large Hadron Collider (LHC) facility prove that experiments being conducted by CERN scientists in Geneva are opening up mysterious inter-dimensional portalsthat disrupt the fabric of space and time and expose Earth to the risk of alien or demon invasion from a parallel universe.

Some people even claim that they can see faces in the images when they look closely enough.

Personally, I don’t know what to think about these photographs.

But what we do know is that there are scientists all over the planet that are concerned that the strange experiments being conducted at CERN could potentially open a black hole, destroy the entire world or open up a portal to another dimension.

And we do know that the director of research at CERN, physicist Sergio Bertolucci, has said that the Large Hadron Collider could open up a “door” to “an extra dimension”…

A top boffin at the Large Hadron Collider (LHC) says that the titanic machine may possibly create or discover previously unimagined scientific phenomena, or “unknown unknowns” – for instance “an extra dimension“.

“Out of this door might come something, or we might send something through it,” said Sergio Bertolucci, who is Director for Research and Scientific Computing at CERN, briefing reporters including the Reg at CERN HQ earlier this week.

Stephen Hawking says the ‘God Particle’ that scientists believe created the world could actually end it, too.

The particle – know as Higgs boson –“has the worrisome feature” that it could become unstable at extremely high energies and create a “black hole” that would collapse the universe, the legendary British physicist has warned in a new book titledStarmus, according to the Daily Express.

“This could happen at any time and we wouldn’t see it coming,” Hawking claimed in the book.

In addition, there are those that have pointed out that “CERN” is the first four letters of the name of the horned pagan god named Cernunnos…

Also, there appears to be a very curious parallel between the geographic location of CERN and a passage in the book of Revelation…

Now on top of all the speculation as to what CERN scientists are really attempting to do with their Large Hadron Collider, many observers could not help but notice that the town in France where CERN is partially situated is called “Saint-Genus-Poilly.” The name Pouilly comes from the Latin “Appolliacum” and it is believed that in Roman times a temple existed in honor of Apollo, and the people who lived there believed that it is a gateway to the underworld. It is interesting to note that CERN is built on the same spot.

Religious leaders – always suspicious of the aims of the scientific world – drew a connection to a verse straight out of Revelations (9:1-2, 11), which makes reference to the name ‘Apollyon.’ The verse states: “To him was given the key of the bottomless pit. And he opened the bottomless pit… And they had a kind over them, which is the angel of the bottomless pit, whose name in the Hebrew tongue is Abaddon, but in the Greek tongue hath his name Apollyon.”

On top of everything else, the people running CERN decided to choose a logo that seems to contain “666”…

What does all of this ultimately mean?

I don’t know, but I can certainly understand why so many people are raising questions.

So what do you think?