Is it just a coincidence that we have seen violence erupt all over America since the unveiling of the arch that served as a gateway to the Temple of Baal in New York City on September 19th? First there were the terror attacks in New York, New Jersey and Minnesota, then there were the unprecedented riots in Charlotte, and over the weekend there was a horrific mass shooting near Seattle. All of these events took place within a week after the Arch of Triumph was put up in New York. Baal was an ancient deity that was often associated with violence and bloodshed, and those that erected this arch have no idea what they are messing with.

Rabbi Jonathan Cahn was standing in the crowd when “the harbinger of Baal” was unveiled last Monday afternoon, and he posted video of the unveiling on YouTube…

In his best-selling book The Harbinger, Rabbi Cahn documented a number of very specific parallels between ancient Israel before it fell and America today, and now he is adding “the harbinger of Baal” to the list. The following is an excerpt from aWND article that Rabbi Cahn just authored about the unveiling of this arch…

But Israel’s defiance of God was linked to a specific entity – the god Baal. Baal was the god to whom they sacrificed their children, before whom they practiced sexual immorality and called good “evil” and evil “good.” Baal was the god in whose name Israel persecuted the prophets and the righteous of their day.

So in the template of “The Harbinger,” when the judgment finally fell, when the ancient kingdom of Israel was wiped off the earth, the people were worshiping Baal. In the last days of Israel, when the harbingers appeared, they appeared in a land covered with the images of Baal. It was the worship of Baal that ultimately brought about the harbingers of judgment. Thus Baal was the god of the harbingers.

In his article, Rabbi Cahn also included a stunning photograph from the unveiling of a stone slate that the organizers had placed close to the arch that contained an image of the Temple of Bel (Baal). This was obviously put there to remind people of the connection that this arch has to that ancient pagan temple. 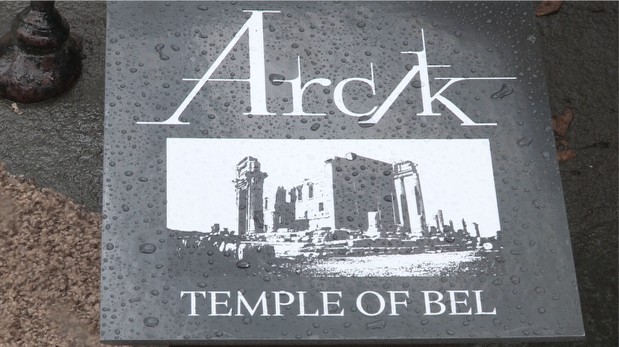 Perhaps it is just a coincidence, but I find it very, very strange that there has been a dramatic outbreak of violence in this country in the week since this arch was put up.

The most recent incident happened over the weekend. A 20-year-old Turkish immigrant named Arcan Cetin walked into a Macy’s department store in the Seattle area and started firing. Five innocent people were killed, and this incident immediately made headlines all over America…

Surveillance footage from the mall shows the suspect entering the building late Friday without a weapon but walking into Macy’s 10 minutes later with what appeared to be a hunting rifle. He fired in the makeup area, then fled on foot out of range of cameras.

One of the victims was a 16-year-old girl who beat cancer, theSeattle Times and KOMO-TV reported.

Police say that Cetin was in a “zombie-like state” when he was later caught and arrested, and authorities say that his motivation for the attack is “unclear” at this moment.

But we do know that the Somali immigrant that stabbed nine people at a Macy’s in central Minnesota just a few days earlier was a radical Islamist, and it has been revealed that the man that planted improvised explosive devices in New York had actually attended a Pakistani seminary…

The alleged New Jersey terrorist charged with trying to blow up Chelsea last weekend with homemade bombs spent weeks getting an “Islamic education” at a Pakistani seminary, according to a report.

Ahman Khan Rahami spent three weeks in Kuchlak, an area described as a longtime “hub” for the Taliban, in 2011, a security official inside the country told the Guardian.

For a very long time I have been warning that we would see a sharp increase in the number of Islamic terror attacks inside the United States, and it is now happening.

I have also been warning that rioting and civil unrest would get a lot worse in our major cities, and what we witnessed in Charlotte over the past week was absolutely chilling. Stores were looted, objects were being hurled at passing vehicles from overpasses, one news photographer was almost thrown into a roaring fire, and at least 16 police officers were injured.

And of course this is just the latest in a string of riots which has hit our country in recent years. The following is from a list of these riots that the Daily Caller has compiled…

Could it be possible that the violence that we have seen during the past week in Charlotte, New York, New Jersey, Minnesota and the Seattle area has some sort of connection to “the harbinger of Baal” that was just unveiled in New York City?

I am sure that this will be hotly debated by both sides.

But what should be exceedingly clear to all of us is that a spirit of violence is rising in America. The tensions that are causing riots like we just witnessed in Charlotte continue to intensify, and the growth of radical Islam around the world will continue to motivate jihadists in this country and elsewhere to conduct more terror attacks.

For decades, most of us could just take for granted that we could go about our daily lives in peace without having to worry about some senseless act of violence. But now that is starting to change in a major way, and “normal life” in America is never going to be the same again.

Next Have the Bushes Forgotten Who Elected Them?