Whenever you let federal bureaucrats get their hands on anything they are probably going to ruin it.  During the Obama administration, the Department of Education spearheaded a transformation of American education that was absolutely breathtaking.  Over a period of about five years, Common Core standards were implemented in almost every state in the entire nation.  Unfortunately, this has resulted in a huge step backward for public education in this country.  Common Core has been called “state-sponsored child abuse”, and it is a big reason why U.S. students are scoring so poorly on standardized tests compared to much of the rest of the world.

According to Wikipedia, at one point 46 states had adopted Common Core, but now some states are having second thoughts…

46 states initially adopted the Common Core State Standards, although implementation has not been uniform. At least 12 states have introduced legislation to repeal the standards outright,[1] and Indiana has since withdrawn from the standards.

Trending: Civil Unrest, Calls To Abolish ICE, Intimidation Of Those Who Work & Support Trump All traced To Obama Effort To Overthrow Government Via OFA

Sadly, many parents don’t even understand how dramatically our system of education has been tampered with.  In her book entitled The Education Invasion: How Common Core Fights Parents for Control of American Kids, Joy Pullmann exposes how the Gates Foundation has been one of the key players in the effort to get Common Core introduced into classrooms all over America…

Organized in seven chapters, her book describes how the Gates Foundation promoted and continues to promote one extremely wealthy couple’s uninformed, unsupported, and unsupportable ideas on education for other people’s children while their own children are enrolled in a non-Common Cored private school. It explains how (but not exactly why) the Gates Foundation helped to centralize control of public education in the U.S. Department of Education. It also explains why parents, teachers, local school boards, and state legislators were the last to learn how the public schools their local and state taxes supported had been nationalized without Congressional knowledge or permission; and why they were expected to believe that their local public schools were now accountable for what and how they teach … not to the local and state taxpayers who fund them or to locally-elected school boards that by law are still supposed to set education policies not already determined by their state legislature … but to a distant bureaucracy in exchange for money to their state department of education to close “achievement gaps” between unspecified groups.

But this isn’t just an issue about control.  The truth is that the approach to teaching basic fundamentals such as how to add and how to subtract is fundamentally different under Common Core.

Let me share just three examples that show how much Common Core is changing the way that U.S. students learn math.  All of these examples have been floating around Facebook, and if you have never seen these before they are likely to make you quite angry.

If I asked you to subtract 12 from 32, how would you do it?  Well, the “new way” is much, much more complicated than how we were all taught to do it… 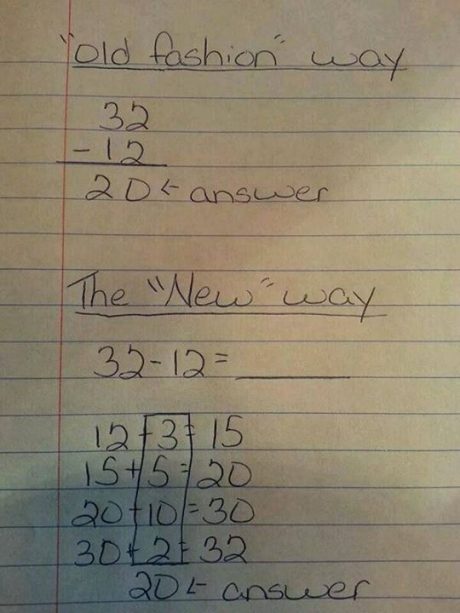 If that first one seemed bizarre to you, than you really aren’t going to like this one… 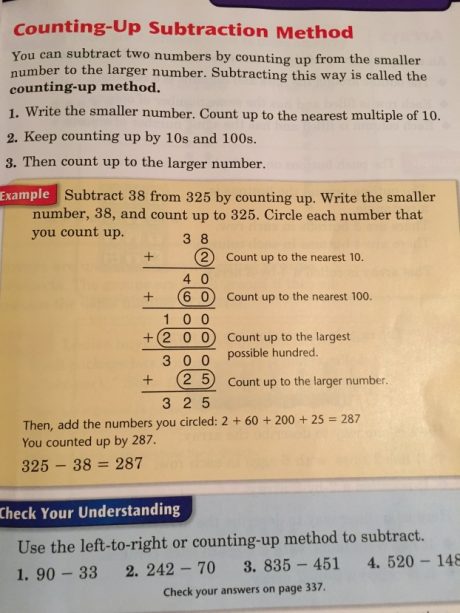 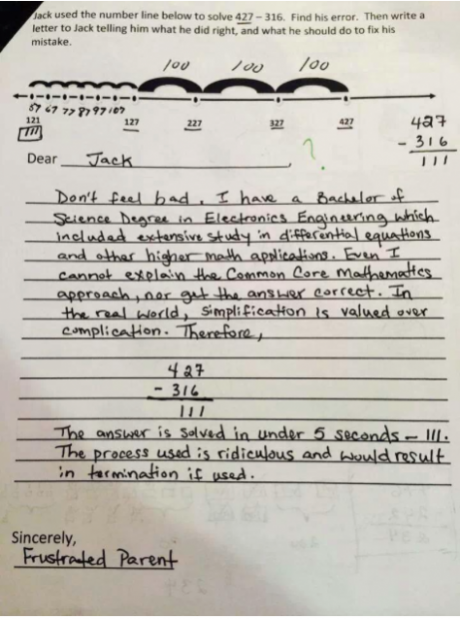 How are kids supposed to function in the real world if this is how they are learning to do basic math?

Personally, I am going to teach my daughter that 9 + 6 equals 15.  But that isn’t how it is supposed to be done under Common Core.  You can watch a video of a teacher explaining the very convoluted Common Core way to solve that math equation right here.

And of course, it isn’t just math that is the problem.  Common Core is systematically “dumbing down” our young people, and that may help to explain why the average U.S. college freshman now reads at a seventh-grade level.

So what is the answer?

The first step in fixing our education system is to repeal Common Core.  But even in red states such as Idaho, there is a lot of resistance…

Since their inception, the Idaho Core Standards have been enmeshed in controversy.

Some legislators and citizens have pushed for a repeal of the Idaho Core Standards, the state’s version of Common Core standards in math and English language arts. Those repeal efforts have gone nowhere in the Legislature.

I don’t know what is wrong with our legislators.  The Republicans have full control in this state, and so there is absolutely no excuse for not getting something done.

As I end this article, I want to give you an idea of just how far the quality of education in America has fallen over the past 100 years.  In Kentucky, an eighth grade exam from 1912 made a lot of headlines when it was donated to the Bullitt County History Museum.  As you can see, it is doubtful whether many of our college students would be able to pass such an exam today…

Next Military Think Tank: Republicans Against Ban On DOD Gender Transition Funds Let Down The Troops